My very first? I was eleven. I had felt intense longing for years, longing which was quickly replaced by thrill and excitement in what proved to be a birthday that set the stage for a lifelong passionate romance. Mysteries unfurled, secrets unlocked, the power now mine…all located within a bright yellow cover. Betty Crocker’s New Boys and Girls Cookbook, my birthday present from Grandma Lillian.

Time and time again, when Grandma asked what I wanted for my birthday, this was at the top of my list. I couldn’t wait to begin baking my way through the pages! Brightly drawn graphics and photographs depicting a marvelous array of treats, beverages, main dishes… It didn’t take long for me to realize that although I had the book, I didn’t have the ingredients or the financial means to make the cinnamon rolls, brownies, paintbrush cookies… and my mom was in no hurry to add the necessary ingredients to our grocery list. My mom had long since perfected an all too easy rebuff to my pleas.  She was immune to the reasoning and logic of an eleven year old. Guilt fared no better, “Please?! Grandma will think I don’t like her present!” No response.

I continued to read through recipes, beautifully staged pictures of food adorned many of the pages. “Doesn’t this look good?” I asked my mom, showing her the picture of the Blushing Pink Soda and Banana-Orange Frosted. “Mmmm-hmmm,” she answered, going back to her reading. “I could make it for you…” “You know I don’t buy soda, Erin.” “But this is for a recipe!” I countered. No response. Conversation? Done. I persisted. “Doesn’t this look pretty?” referring to the picture of the Enchanted Castle Cake. “Mmmmm-hmmm.” “I could make it for you!” “That would be a lot of cake for me to eat.” “That’s OK, I would help you!” “Why don’t we wait for a birthday.” Discussion over. Conversations like this continued, all variations on the same theme until Christmas time.

Although a wonderful cook, my mom didn’t bake often, most likely because it was just the two of us at this point in our lives. She did bake at Christmas. Aunt Ena’s icebox cookies, Russian tea cakes, thumbprint cookies, spritz cookies, and the occasional cookie cutter cookies. It just so happened that there was a sugar cookie recipe in Betty Crocker’s New Boys and Girls Cookbook! At long last I was able to put my cookbook to use. The cookies were a success and the recipe became the go-to recipe for cookie cutter cookies for many years.

Looking at the recipes in that cookbook now about one-fourth of the “recipes” are are just directions using a Betty Crocker mix, typically with an additional ingredient or two thrown in for good measure. Quick Peanut Butter Cookies: cake mix, peanut butter, eggs, water. Brownie Fudge Cake: fudge brownie mix, water, eggs, nuts. There are also a number of “recipes” that are merely directions for presentation. Bunny Salad: pear half, two raisins (eyes), one cinnamon candy (nose), two blanched almonds (ears), cottage cheese ball (tail). Rocket Salad: pineapple slice (launching pad), one-half banana inserted into pineapple slice, one-half maraschino cherry attached to the top of the banana with a toothpick. Considering the outcry that came from the cover of the Little Mermaid VHS tape due to the phallic-ness of a castle turret, I don’t think the Rocket Salad recipe and accompanying drawing would make a children’s cookbook today.

My second cookbook was Peanuts Cookbook (think Charlie Brown & Snoopy, not nuts), via my 5th grade Scholastic Book Club order. I had better luck acquiring the ingredients for one of the recipes in this particular cookbook due to my mom’s love of lemon–Lucy’s Lemon Squares. Peanuts Cookbook had it’s share of questionable “recipes”. Happiness Is a Hot Cheese-Tomato Sandwich. Security Cinnamon Toast. Peppermint Patty’s Prune Whip. Rather than a reflection on Charles Shultz or Betty Crocker per se, the recipes were more of a sign of the culinary times and lackluster American palate. 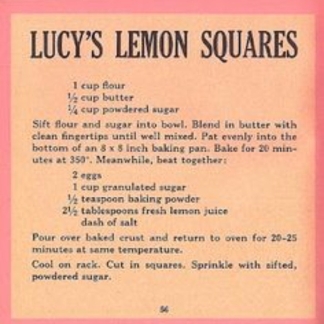 In retrospect, although I didn’t cook or bake many of the recipes in Betty Crocker’s New Boys and Girls Cookbook or Peanuts Cookbook, what it did serve to accomplish was open my eyes to possibilities beyond what I was used to eating. This was 1973, long before Google searches for recipes, before food blogs, long before recipe books became de rigueur.

Cookbook evolution and their role in our lives seemed to be on an upswing about the time I graduated from high school in 1980. Pillsbury began publishing small magazine-style cookbooks, typically located at the checkout line of the grocery story. Although these had their share of recipes featuring Pillsbury product ingredients, for me they opened up possibilities beyond the typical meat/starch/vegetable dinners that were too common at this time. It was also about this time that my mom gave me my first substantial cookbook, The Joy of Cooking, quickly followed by a bridal shower gift from Aunt Marilynn, The Silver Palate Cookbook, and my purchase of More of the Best of Bon Appétit.

These three cookbooks shaped not only what and how I cooked but more importantly how I began to think about food. Each new recipe became an adventure into new and previously unchartered territory. Sometimes new ingredients, sometimes a new combination of familiar ingredients. New techniques. New cultures. New tastes.

Cookbooks have a way of capturing the essence of society at the time they are written, stories played out through ingredients, directions, food. The best cookbook authors impart of bit of themselves through the headnote. I love reading how a recipe was developed, why it is a family favorite, or things the author wants you to note while baking or cooking. The recipes, crafted, created, tested, and finally selected for a cookbook are much like songs chosen for an album release. Together they tell a story, capturing a point in time in the author’s life. I have come to appreciate a well written recipe….measured in kg, clear steps, suggested serving size, suggested substitutions for hard to find ingredients. Well photographed food is a bonus.

There are several cookbook authors whose new releases I follow, like one would the tour dates of a rock star–not because of their status, but rather the fun, beauty, and timelessness I find in their recipes year after year. Ina Garden, Rick Bayliss, Leslie Mackie/Macrina, Joanne Chang/Flour, Chad Robertson/Tartine, Mollie Katzen/Moosewood, Michael Northern/Nordstrom Cookbook, Ottolenghi, and so many more. Gauging by unhappy and sometimes disastrous outcomes, there are also cookbook authors out there who do not thoroughly test their recipes, let alone read them.

Over the years I have accumulated what some might call a substantial cookbook collection. I can truthfully say I have baked or cooked at least one thing, and typically more, from each cookbook, with the exception of any that have arrived in the last month as it is too hot in the house to bake or cook. Even if I don’t use a cookbook often, I do go back to them, often rereading and using them for reference. Although I have donated hundreds of books over the years to Goodwill, I still have each of my cookbooks.

The shear volume, no pun intended, of my cookbooks isn’t without its challenges. Organization is one of two primary challenges I have with my cookbook library. Just how do you organize your cookbooks? Currently, my primary organizational structure is by cuisine and type. For example all of my Norwegian cookbooks are kept together, baking separated from cooking and then organized by author. Over half of my cookbooks are for baking. These are separated by topic and author from my other cookbooks. Cake-only recipe books separated from cookie-only recipe books, etc.

Challenge #2 typically begins something like this “…that was a great (fill in name of dessert/dish)…which recipe was that?” Unless it is something I bake or cook regularly, the hunt is on! This endeavor is often made even more challenging by those cookbooks whose editor did not insist on an index. At a recent class at The Pantry, several of us were lamenting the dangers of too many cookbooks. One of our fellow class members shared his solution to this issue, Eat Your Books. Eat Your Books is a subscription-based website where you can catalog all, or almost all, of your cookbooks. This not only allows you to search for a specific recipe, it also allows you to search through all of your cookbooks based on what you would like to bake or cook.