Unique. Novel. Exciting. Always something new to learn. These were just a few of the reasons I looked forward to spending time with my Grandma Lorenz. We did things that no one else seemed to do, at least not my friends in Aberdeen or Ellensburg or Prairie Village, Kansas. I didn’t know anyone else who made krum kaga, fattigman, or lefse, let alone someone who knew what they were. No one else I knew ate waffles for dinner and dessert at the same meal in the summertime. Who stored dozens of tins of unpronounceable cookies in the garage at Christmastime. Who stored Hardanger lefse in a cool dark cupboard to be re-hydrated and eaten at a moments notice. Who ate sweet brown cheese on toast or waffles, or just on its own.

There were so many things that I experienced as a child without realizing, understanding, or appreciating their significance. After all it was just what we did, it was normal. Grandma never sat me down to explain that these were customs unique to Norway. Over the years I came to the realization on my own and from my own research that many of Grandma’s long held rituals were in fact strictly Norwegian or Scandinavian in nature.

Syv slags kaker, or seven sorts of cookies, at Christmas is just one of these customs. I remember asking Grandma why she baked so many different kinds of cookies at Christmas. Her reply was a simple, “It’s just what we do.” “How many do you make?” “At least seven. More than seven is better,” was her answer. I didn’t think to ask more than that. Seven kinds or more–it just was.

Much later when I was baking my own seven sorts at Christmas I began to question why. I found out that the Norwegian custom of seven cookies is critical, never less than seven. The tradition holds that offering seven, or more, kinds of cookies to guests at Christmastime ensures a prosperous new year for the guest as well as the host.

For me Christmas wouldn’t feel like Christmas without baking cookies, lots of cookies. When Jennifer and Eric were younger they would help me bake Christmas cookies. After Jen moved out on her own she would periodically help bake if it worked with her work schedule. When Eric was in college one of the things I looked forward to most was when he would come home for winter break and we would bake together. After both Jen and Eric were out of college and had jobs, baking Christmas cookies became primarily a solitary endeavor. I remedy this now with a new tradition, watching/listening to Christmas movies as I bake. Christmas Vacation, Elf, Prancer, A Christmas Story, It’s a Wonderful Life, Santa Clause, …. until I am done baking.

Syv slags kaker is a tradition I have held onto for over thirty years as an adult. I have been baking my seven sorts each Christmas since 1984. That was the year I married Jennifer and Eric’s dad. I had my own kitchen with enough kitchen and baking equipment to make the task doable. When talking syv slags kaker, chocolate chip or peanut butter cookies don’t even enter the fray of Christmas cookie baking, in this arena they just don’t count. We are talking about very specific Christmas cookies. Norwegian cookies fall into one of three categories: baked, fried, or made with an iron. My list seven sorts fall primarily into the baked or made with an iron category and mirror my grandma’s list plus or minus a few.

In addition, this year I also made a kransekake, or ring cake, and Mor Monsen cake.

Rosettes and fattigman are not on my regular seven sorts list for a couple of reasons. First….hot oil. It scares me. When Jennifer and Eric were little hot oil just did not seem like a good idea. Secondly, what do you do with all that oil when you’re done? I still don’t have the answer to that. Third, you end up smelling like a fry bin, which brings back memories of my first two jobs as a teenager.

I did try to make rosettes and fattigman a year ago at Christmas after a ten year hiatus. In preparation I watched several You Tube videos and thoroughly read through recipes. The Sons of Norway video with the older gentlemen was quite good. But apparently not good enough. My rosettes fell off my iron into the oil in gloopy glops of unrecognizable batter more times than I could count. By the time I watched even more You Tube videos to ascertain what I was doing wrong, determining my oil and iron were not hot enough, I ended up with six rosettes–which I promptly ate.

My success rate with fattigman was not much better. By this time my oil was hot enough, actually too hot. Almost immediately my fattigman were dark brown. Not good. It took a long time for my oil to cool and by the time it did, it was of course too cool. I came to the conclusion that a new thermometer was in order before any more attempts were made. This year I had a new thermometer but I did not have the heart nor stamina to try them again. Fear of oil won out.

Instead I made a kransekake. I had attempted one years ago with varied success. This year? Victory! The dough was wonderfully malleable. The rings came out of the pan in one piece. The icing held the rings together like true mortar. Most importantly, it was addictively delicious. 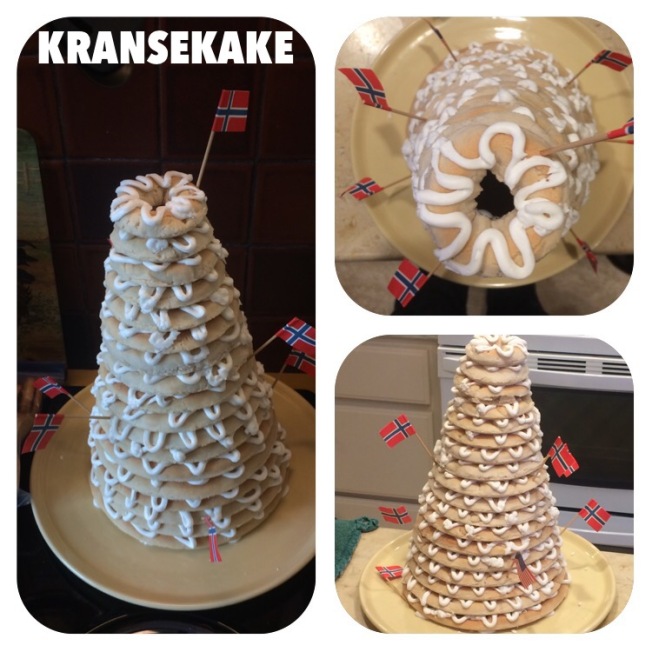