Hot air balloon rides and learning to cross country ski in her 60’s. Groovin’ on Furby’s antics.  Taking a Chinese food cooking class culminating with a singlehandedly prepared family dinner upon graduation. Ferry rides to Victoria with her sisters Anna & Betsy. Trips to the Ballard Locks, picnic lunch in tow. Shopping trips to Uwajimaya, specifically the meat department to see the look on Jen and Eric’s faces. Numerous trips to The Seattle Center with trips too many to count to the top of Space Needle, an endless patience for rides in The Bubbleator and a multitude of exhibits at the Pacific Science Center.  Creating a giant bubble maker with homemade bubble solution. Always curious, always learning. Grandma Lillian was always ready for an adventure. Her kitchen was no different.

Following my parent’s divorce at age eight, a portion of each summer was spent with my dad. One of the major highlights of these summers was spending a week or so with my Grandma and Grandpa Lorenz. After my parent’s divorce my mom and I moved from Aberdeen to Ellensburg, and the once regular visits with my Grandma and Grandpa Lorenz throughout the year decreased, limited to occasional visits when I my dad took me for his one weekend a month. Those visits were drastically diminished two years later when my mom and I moved to Prairie Village, Kansas. Suffice it to say, I relished summertime with Grandma, and some of our best adventures were in the kitchen.

One of the more memorable summer adventures started with a simple trip to the grocery store. Grandma and I made the short trip up James Street to Safeway. Making our way through the produce department I stopped in front of a mound of artichokes. “Can we get some?” I asked. “What?” Grandma said somewhat incredulously. “Artichokes. Can we get some?” I replied. “What would we do with them?” I thought this a rather funny response, as the answer was rather obvious. “Cook and eat them!” Grandma was no slouch in the kitchen, so it surprised me that artichokes and the idea of preparing and eating them seemed totally alien.

Thinking a bit Grandma asked, “What do you do with them once you cook them?” Again, I was surprised with her response and added, “Pull off the leaves and dip them in melted butter.” At that time I didn’t know that another alternative was to dip them in aioli. “I can show you how.”

Not one to miss out on an adventure, Grandma hesitated just a bit before acquiescing. She picked out two artichokes, carefully put them in a plastic bag, and added them to our basket upon which she added, “I don’t know if your grandpa will eat this.”

Once back at home, Grandma and I were busy unpacking and putting the groceries away when Grandpa walked into the kitchen. Grandpa was surveying the food as we continued our work, most likely to determine that night’s dinner menu. It was in the midst of this activity that Grandpa spotted the artichokes exclaiming, “What are those?!” I happily replied, “Artichokes!” not not noticing the look on his face. “I know what they are, why are you wasting money on them?!” “Paul, they’re for dinner. Erin is going to show us how to cook them,” Grandma’s measured tone was lost on Grandpa. “If you wanted weeds for dinner you could’ve gone out to the field to get them instead of wasting money.”

I was stunned. “They’re not weeds, Grandpa. They’re artichokes.” Waving his hands dismissively and shaking his head side to side as he spoke,“They’re weeds! It’s bad enough that we wasted money on weeds, I’m not eating them.” With that he walked out of the kitchen. I felt crushed. “Well, that’s just more for the two of us!” Grandma whispered to me.

Grandma and I proceeded with dinner preparations, including the artichokes. With the table set, dinner ready, two small bowls of melted butter and two empty bowls for spent leaves we called Grandpa for dinner. Grandma and I started with the artichokes. Pull a leaf, dip in butter, scrape the meaty flesh off the leaf with front teeth, discard leaf, and repeat. Mmmmmm.

It wasn’t long before a third bowl of melted butter joined the table and Grandpa joined in the artichoke revery. Feeling the good vibes of artichokes and butter emanating from Grandpa, I ventured, “Why did you say it was a weed?” Grandpa replied, “It’s in the same family as Russian Thistle.” Pointing to the kitchen window, “The sticker weed with the purple flower that grows along the fence line in the neighbor’s field.” “Not bad for a weed, huh?” I asked.

At home or a restaurant, butter or aioli, grilled or steamed—artichokes take me back to Grandma. 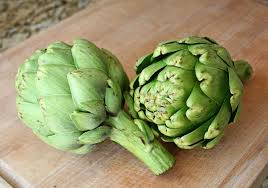 One thought on “Weeds”