If desserts were movie stars, my mom’s pies, crumbles, and crisps would be up for an Academy Award. She had a supporting cast of characters as well, Snickerdoodles, oatmeal cookies, steamed pudding, sour dough cinnamon bread to name a few. But the biggest contender for the Oscar would be Mom’s Apple Cake.

Growing up my mom didn’t make desserts often and once my parents were divorced she baked even less frequently. The spoils of her baking would be incumbent on us to finish off since it was just the two of us. Which brings me to Apple Cake. Mom’s Apple Cake recipe comes from her mom, my Grandma Dorothy, although I don’t remember my Grandma making it or necessarily eating it at her house. So when I reference Mom’s Apple Cake I think of my mom, Sally. When Mom references Mom’s Apple Cake, she thinks Dorothy.

Knowing that a full 9 x 13 pan of apple cake was a bit much for the two of us, my mom would often freeze individually wrapped pieces, first in plastic wrap and then in foil. This practice didn’t deter me from eating the apple cake straight from the freezer. Amazingly enough it was almost as good frozen as not, still slightly soft with an added chewiness.

This cake comes together quickly, doesn’t use a mixer, and requires only one pan. This apple cake is great on its own, with ice cream, ice cream with a drizzle of caramel sauce, whipped cream…take your pick. I will give fair warning though, that if this apple cake is part of a dessert buffet it may get overlooked. It’s not a fancy or necessarily pretty cake. In fact, it looks a bit plain. One could actually say a bit homely. But don’t judge a book by its cover. It is moist with a nice hint of spice from the cinnamon, and always better the day after it’s made. If you don’t care for the nuts, you can easily leave them out. 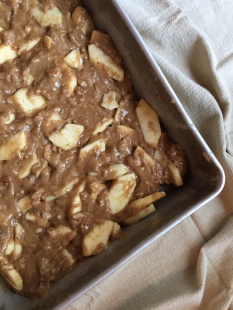 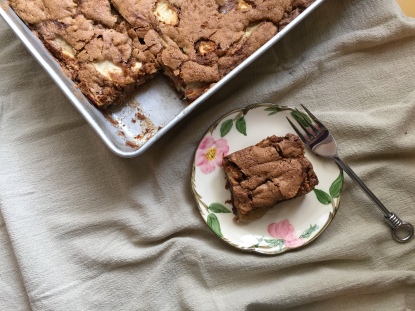 Mix eggs & sugars in a large bowl with a whisk until thoroughly combined; add vanilla & oil, whisking until combined. Stir in apples and chopped nuts.

Mix the following ingredients together in a separate bowl:
2 c flour
2 t baking soda
1 t salt
2 t cinnamon
Once the flour mixture is combined, add to the apple mixture, stirring thoroughly with a large spoon. The batter will seem dry at first; continue stirring until flour mixture is incorporated and there are no dry spots. Spread mixture into a 9 x 13 pan. Bake @ 350 degree for 40-50 minutes, or until toothpick comes out clean. Cool. Eat. Enjoy!

One thought on “Don’t Judge a Book”